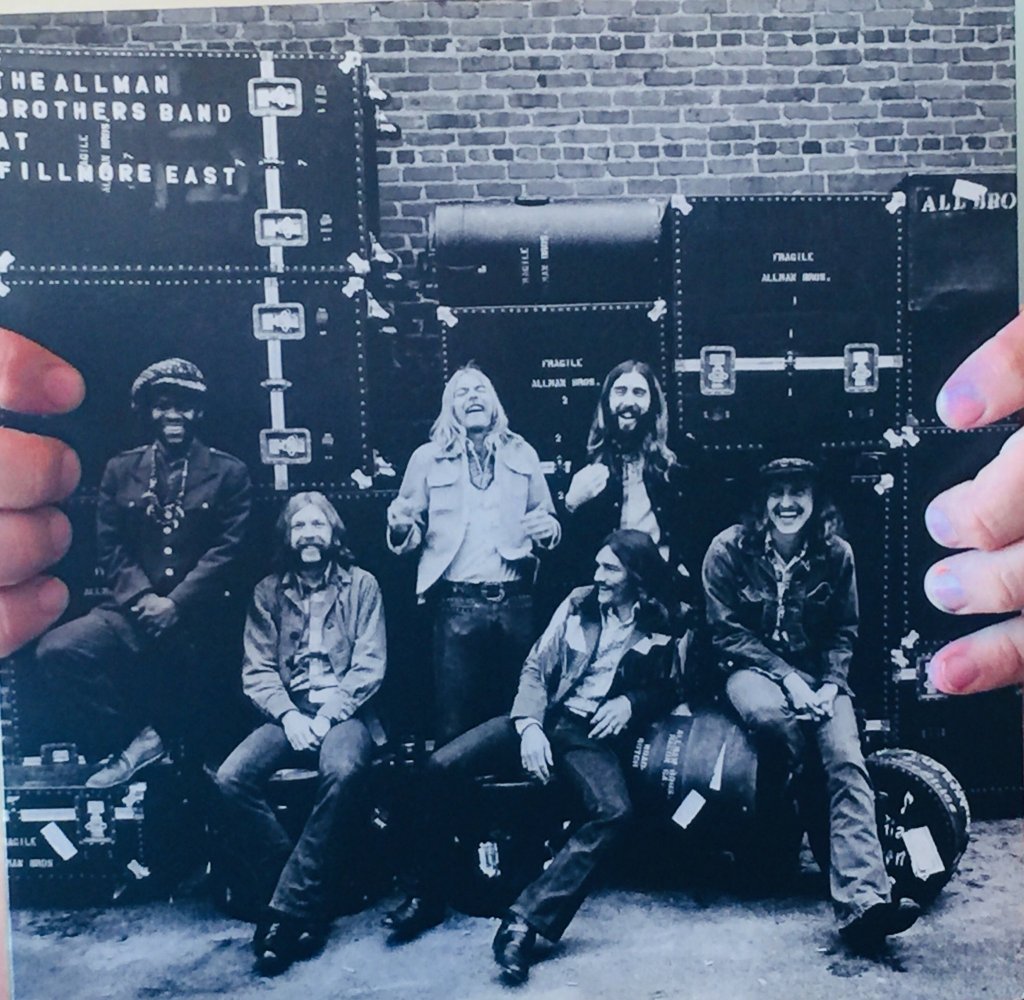 In 1970 The Allman Brothers Band were struggling. The sextet consisting of vocalist and organist Gregg Allman, slide guitar virtuoso Duane Allman, second lead guitarist Richard “Dickey” Betts, bassist Berry Oakley, and dual drummers Jai Johanny “Jaimoe” Johanson and Butch Trucks had been playing a unique mix of rock ‘n’ roll, blues, soul and jazz that later became known as “southern rock.” Using this formula the Allman Brothers recorded and released two albums that despite receiving good reviews from rock critics, weren’t selling. Although the band had begun to gain a reputation as a formidable live act, without a hit record, their future as a band was in doubt.

Much like kindred spirits, the Grateful Dead, Allman Brothers shows centered on long improvisational jams. Like the Dead, the Brothers found the studio confining. And just as the Dead did in 1969 with “Live Dead,” the Allmans believed the solution would be to record live in front of an audience. A live album from a band with no hit songs and a habit of stretching tunes well beyond the ten minute mark in concert, may not have seemed like the safest path to success, but the Brothers were confident.

Recording took place at New York’s Fillmore East on March 12th and 13th, 1971. The album was released the following July.

Opening simply with the announcement, “Ok, the Allman Brothers Band,” the band takes off into the Blind Willie McTell classic, “Statesboro Blues.” The song is a showcase for Duane’s explosive slide guitar riffs and solos over the Allman’s trademark southern boogie. The band further displays their classic blues credentials with with a funky cover of Elmore James’s “Done Somebody Wrong” and an extended take on T-Bone Walker’s oft covered slow blues, “Stormy Monday.”

Side 2 of the double album is another blues cover, “You Don’t Love Me.” The Allman’s version is a sped up foot stomping, ass moving nineteen minute boogie, full of extended guitar excursions from both Duane and Dickey.

“In Memory of Elizabeth Reed,” named after a random gravestone in a Georgia cemetary, is an instrumental piece that finds the Allmans venturing into jazz fusion territory. The song opens with Dickey performing slow moody volume swells before going into the song’s central dual lead guitar driven melody. The guitars harmonize beautifully over Gregg’s hammond B3, Berry’s dancing bass and the constant propulsive drumming of Butch and Jaimoe. Dickey takes the first solo followed by a brief organ solo from Gregg. Duane takes the next solo, an absolute face melter. Duane uses his solo spot to jam on the ‘Liz Reed melody while ramping up the instensity for nearly five minutes. Like a climber ascending Everest, his guitar ascends to a spectacular peak before slowing down and then again ascends beyond the mountain’s peak high into the atmosphere. After a short drum break, the band concludes the song with a brief repeat of the tune’s main melody. “In Memory of Elizabeth Reed ” is a masterpiece, but it is only an appetizer for what is to come.

Occupying the entirety of the album’s fourth side, “Whipping Post” is a fucking guitar apocalypse. Duane humbly announces the tune to the audience as “a tune from our first album, Berry starts her off…” An excited fan calls out “Whipping Post,” to which Duane simply responds, “you guessed it.” From there, a potentially world destroying performance begins with Berry’s rumbling bass riff. The guitars both enter, one coming in with a slight grumbling tone, the other sounding like a jazzier counterpoint. Gregg sings the first verse leading into a four minute guitar solo from Duane, which seems to prove that his energy supply reaches into the infinite. Gregg sings another verse before Dickey leads the listener into the wormhole with his emotive guitar building, destroying and rebuilding everything in its path. As his first solo ends around the ten minute mark instead of returning back to the song’s verses, the bottom drops out and the band begins exploring the possibilities of the jam, with Dickey’s guitar leading the way through space. Another four minutes glide by before Dickey begins a slowly building blues influenced solo. As his solo reaches climax the entire band joins together to bring the song into several whiplash like crescendos, before returning to the main body of the song alternating between more of Gregg’s soulful singing and the bands exploratory passages. The entire epic closes twenty two minutes after it began. Listening to the album from the safety of your home stereo one can’t help but imagine the live audience standing there, stunned into silence, mouths agape, unable to process the force that had just melted their faces and liquified their brains. Then, incomprehensibly we at home hear the first few notes of “Mountian Jam,” before the grooves on the record run out. The record buying public would have to wait until the Brothers’ next album, “Eat A Peach,” to hear that thirty three minute epic in it’s full glory. Sadly, by the time of that album’s 1972 release, Duane Allman would be dead, killed after wrecking his motorcycle.

Slightly over a year after Duane, Berry Oakley would die in an eerily similar way after wrecking his motorcycle not far from where Duane had his crash.

The Allman Brothers Band endured and released their most commercially successful album, “Brothers and Sisters,” in 1973. Their success had been hard won, but it wouldn’t have come to pass without the Fillmore East album, which was the Brothers first hit record, selling 500,000 copies three months after its release.

“The Allman Brothers Band At Fillmore East,” has gone on to be revered as one of history’s greatest live records. The Fillmore recordings are a testament to the power of electric guitar solos, the blues and a really great live rock and roll band.

I'm just an obsessed music fan with too much to say. View all posts by J. Edward Griffin

One thought on “CLASSIC ALBUMS: The Allman Brothers Band – At Fillmore East”